Arnaud and Marie are married and are in their 50’s.

They have 4 children, only the youngest one is home, she is 18.

They enjoy hunting and horseback riding among others.

You can walk everywhere from their home.

The host room is  very quiet. Bathroom to be shared if children are home.

The family only welcomes GIRLS.

Subway stop Ampère or Perrache train station is 5 minutes away, home is in front of University Lyon 2, Lyon 3, UCLY.

For reasons of confidentiality, we cannot publish pictures of the family and the house front. If you are interested by the family, we can send you pictures once the contact established. 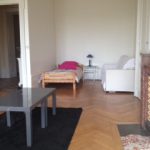