Joëlle and her husband will be happy to host you in their flat in the very center of Lyon.

From where they live you can walk everywhere!

They have a numerous family but all their children have left home either for studies or are already married.

Joëlle is a doctor.

They live in an apartment, 1st floor, 6 bedrooms, 3 bathrooms near “Perrache” train stations where numerous buses as well as subway and tramway lines T1 and T2 are accessible.

Wifi available throughout the flat, a piano.

They rather like short stays (maximum 2 months) and independent students because they have a busy life! 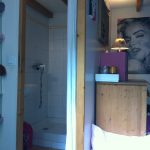